The cryptocurrency market continues its slow slide downwards. Amid the ongoing war in Ukraine, its total cap has fallen by 1.7% in the past 24 hours. At $1.79 trillion, it has also fallen by roughly 28% in the past 90 days. However, with macroeconomic factors weighing down the market, rather than fundamental issues, the bearish climate offers plenty of good discounts. We’ve compiled the best of them in this list of 5 top cryptocurrency to buy on cheap prices. 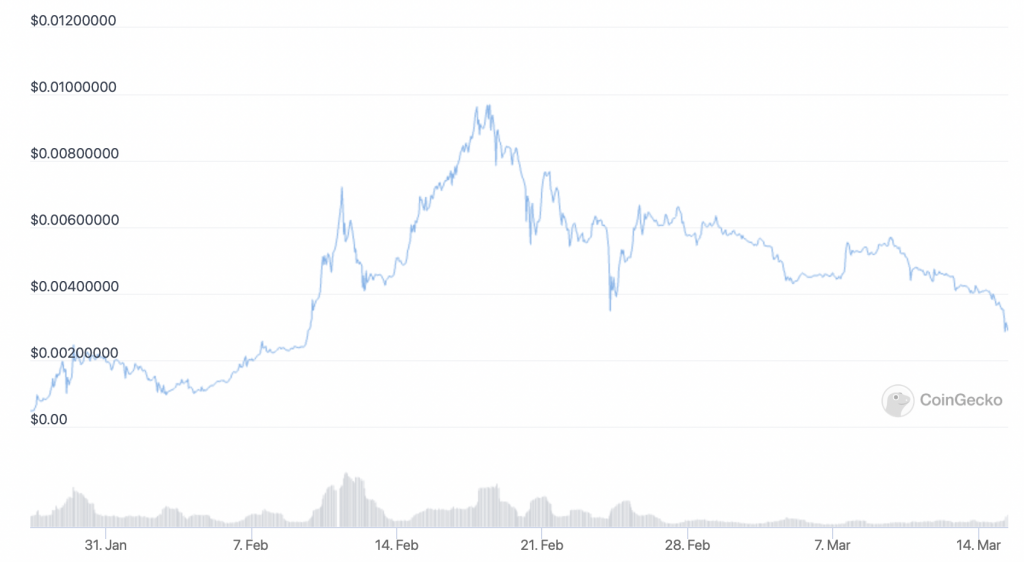 LBLOCK is the native token of the Lucky Block lottery platform, which runs on Binance Smart Chain. It now counts around 44,000 holders, with the coin reaching a $1 billion market cap in only three weeks.

The platform’s first draw is taking place on March 25th, with regular draws continuing afterwards. Users can use LBLOCK to enter each draw, with entrants having the opportunity to win 70% of each lottery’s jackpot fund. Meanwhile, holders of LBLOCK will equally share 10% of each pot, regardless of whether they enter a particular draw.

Lucky Block is also due to mints its first ever non-fungible tokens (NFTs) today. These NFTs are limited to 10,000, and they grant holders entry to a special NFT-based draw. The fund for each of these NFT draws will be around 2% of the main Lucky Block, with estimates suggesting that this will work out to around $10,000. The minting was due to take place on Friday, but has been delayed, giving interested parties more time to participate.

LBLOCK is tradable on PancakeSwap and LBANK Exchange. With more listings due soon, it should continue rising over the medium- and long-term. 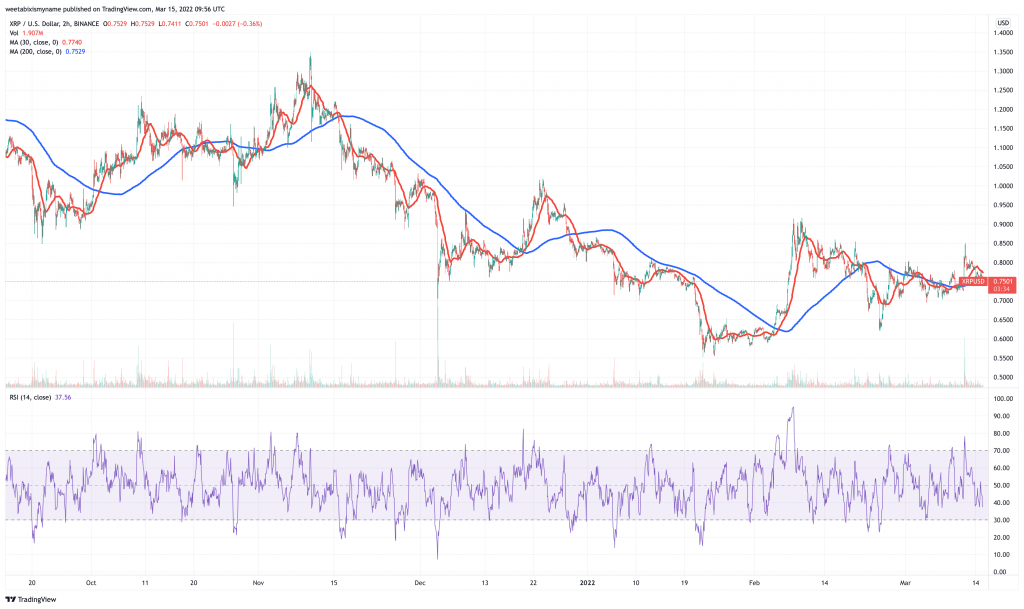 XRP’s indicators are up and down, much like the rest of the market. However, its 30-day moving average (in red above) passed its 200-day average (in blue) a couple of days ago. This suggests better-than-average momentum, although its relative strength index (in purple) is only at 40.

Despite its see-sawing, XRP is in a very good position for the future. A development in Ripple’s ongoing case with the SEC suggest that the cryptocurrency firm may end up securing a good settlement. Namely, Judge Torres refused the SEC’s motion to strike Ripple’s fair notice defense. This means Ripple’s argument that the SEC never provided it with a fair notice can be taken into consideration.

BOOM! (And I don’t use that term lightly)

The SEC’s Motion to Strike the Fair Notice Defense is DENIED.

This is the one I’ve been waiting for.

NOW the SEC has something to lose. https://t.co/LcRpWysixn

Basically, the ruling makes it increasingly likely that Ripple will win its case, or at least secure a favourable outcome. And once it does win or settle, XRP is likely to surge from its low price. This is why it’s one of our 5 top cryptocurrency to buy on cheap prices. 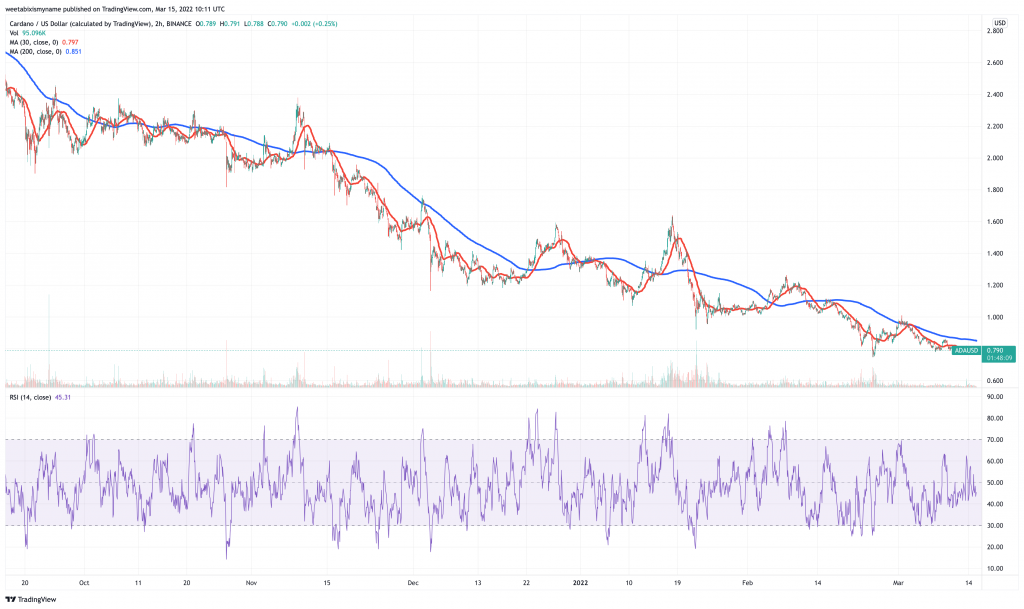 ADA’s technical indicators suggest that the market is under-appreciating it a little too much right now. Its RSI has been below 50 for most of March, while its 30-day average has been falling below its 200-day. Not only does this suggest that it’s underpriced, but that it’s overdue a rebound.

The altcoin’s fundamentals support this picture. That’s because Cardano has been developing rapidly over the past few months. The launch of smart contracts in September has been followed by Cardano’s ecosystem growing to more than 500 projects.

In parallel with this growth, Cardano actually recorded a total value locked in for the first time ever at the beginning of this year. From under $1 million at the start of January, this figure has now risen to $191 million. The launch of its DEX SundaeSwap, towards the end of January, is largely to thank for this growth.

It’s also worth pointing out that Cardano is attracting some institutional interest. Last month, ETP provider Valour announced that it’s launching ADA-based exchange-traded product on the Frankfurt Stock Exchange. This could open up the ADA market to more liquidity and institutional interest, particularly when macroeconomic conditions take a turn for the positive. 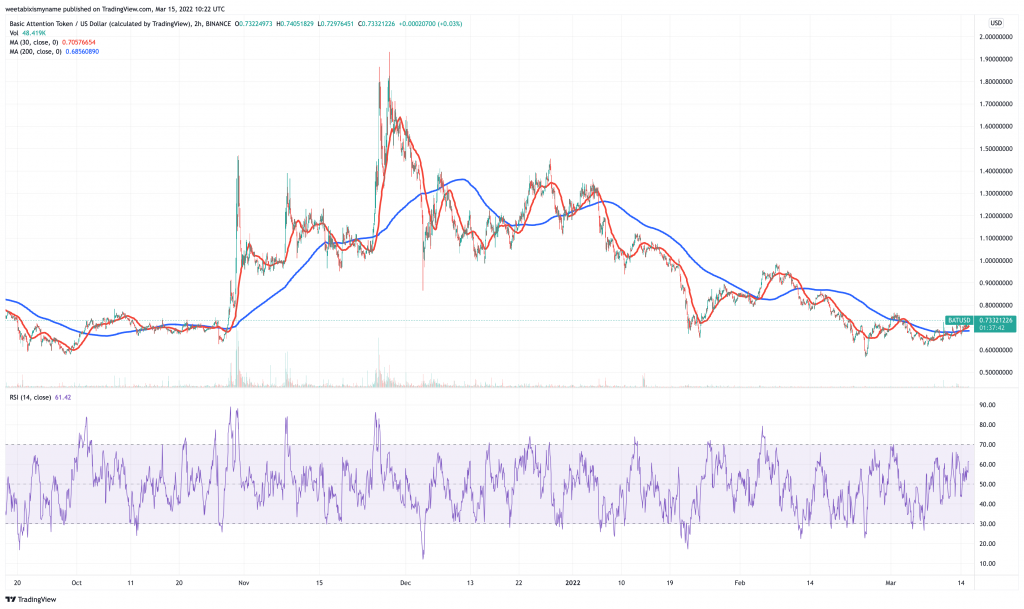 BAT’s indicators have just come to life, suggesting an incoming rally. Its 30-day average has formed a golden cross with its 200-day, signalling a possible breakout. Similarly, its RSI has risen to 60, revealing good momentum.

The cryptocurrency has some ground to recovering, being down by 61% compared to its all-time high of $1.90, set back in November. Its current rises are largely related to the growing usage of its Brave web browser. This now counts around 49 million monthly active users, up from 36 million at the beginning of October.

This rise is also complemented by a similar rise in BAT wallets, indicating that more people are holding and using BAT. And with Web3 likely to grow in stature throughout this year, it’s likely that more people will turn to BAT as the year progresses. 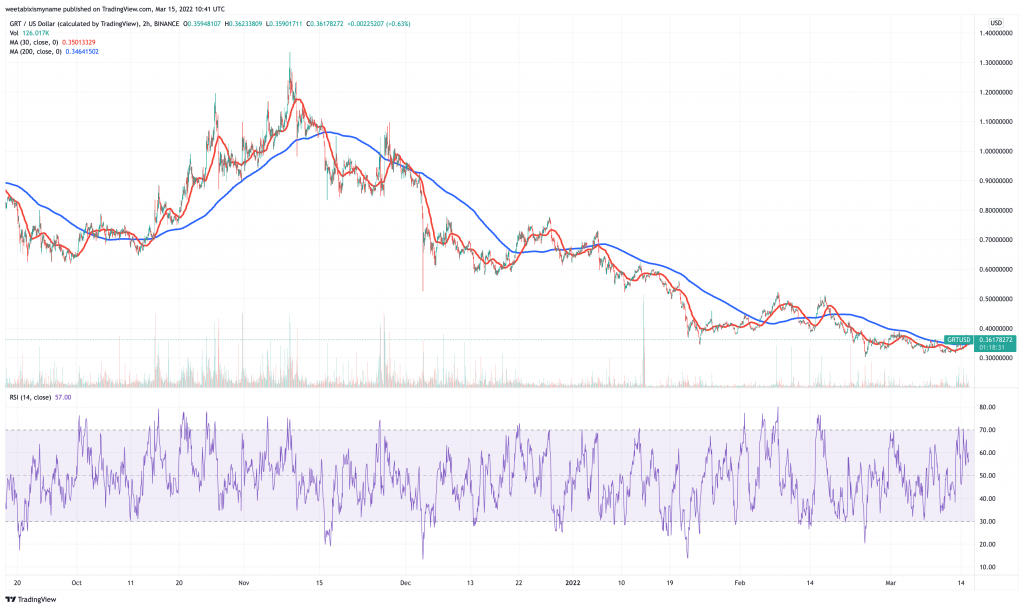 GRT’s indicators suggest that a rally may be beginning. Its 30-day average is about to overtake its 200-day average, while its RSI has reached 70. This shows good momentum, at a time when many larger coins are struggling.

GRT is the native token of the Graph, an open-sourced protocol enabling users to collect, process and store data from various blockchain applications. GRT is staked by users of the protocol in order to retrieve and store information. And much like Basic Attention Token, it has been rising recently in parallel with the growth of Web3 platforms.

I highly, highly recommend @graphprotocol for indexing your on-chain data. And this is one of the best, most simple to follow tutorials out there. https://t.co/9O5s0COwJH

The Graph continues to attract new adoptions and partnerships. Last month, it saw NFT-based game Nifty League migrate its data to the platform, while it also has witnessed significant usage with relation to AssangeDAO, which is raising funds in support of Julian Assnage’s legal defence.

.@juiceboxeth‘s subgraph on The Graph Network continues to scale ✨

The same protocol that powered @ConstitutionDAO is now enabling contributions to @AssangeDAO.

Yesterday, over 2.6 million queries to the Juicebox subgraph were served via the decentralized network 🤯🧵

It’s because of this growing usage that GRT has begun recovering from an 87% drop since reaching an ATH of $2.84 in February 2021. This is why it’s one of our top 5 cryptocurrency to buy on cheap prices.