Three Solana Projects To Watch For The Week Of March 14th

Though prices may be in the trenches, these three Solana projects are ones to keep an eye on once the bull run resumes.

Despite the vast amount of strong ecosystem projects, one of the strongest smart contract platforms, Solana (SOL), has ushered in some of the weakest performing projects. This was in part due to the rapid growth of Solana early on in the 2021 bull run, as developers on the platform didn’t have time to keep up with its pace. However, now that Solana has had some time to simmer and developers make more progress, the next bullish wave for Solana could support a flourishing decentralized finance (DeFi) ecosystem. Here are three Solana projects to watch for when that happens.

RECOMMENDED: AUDIUS LAUNCHES ON SOLANA — USERS CAN NOE GET PAID TO STREAM MUSIC

The first project I’d like to cover is the decentralized music streaming platform Audius (AUDIO). Audius has a highly ambitious goal, and thus immense upside to capture if pulled off. One of the major problems of streaming services is the lack of credit and ownership that artists have over their work. Audius hopes to turn this reality on its head by restoring content ownership to musicians. Simply by using the platform — streaming music, creating playlists, etc. — users can not get paid for these actions, rather than paying the centralized providers like Spotify or Apple Music for the same features. 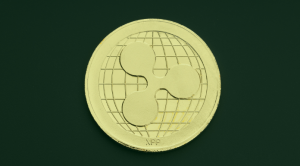 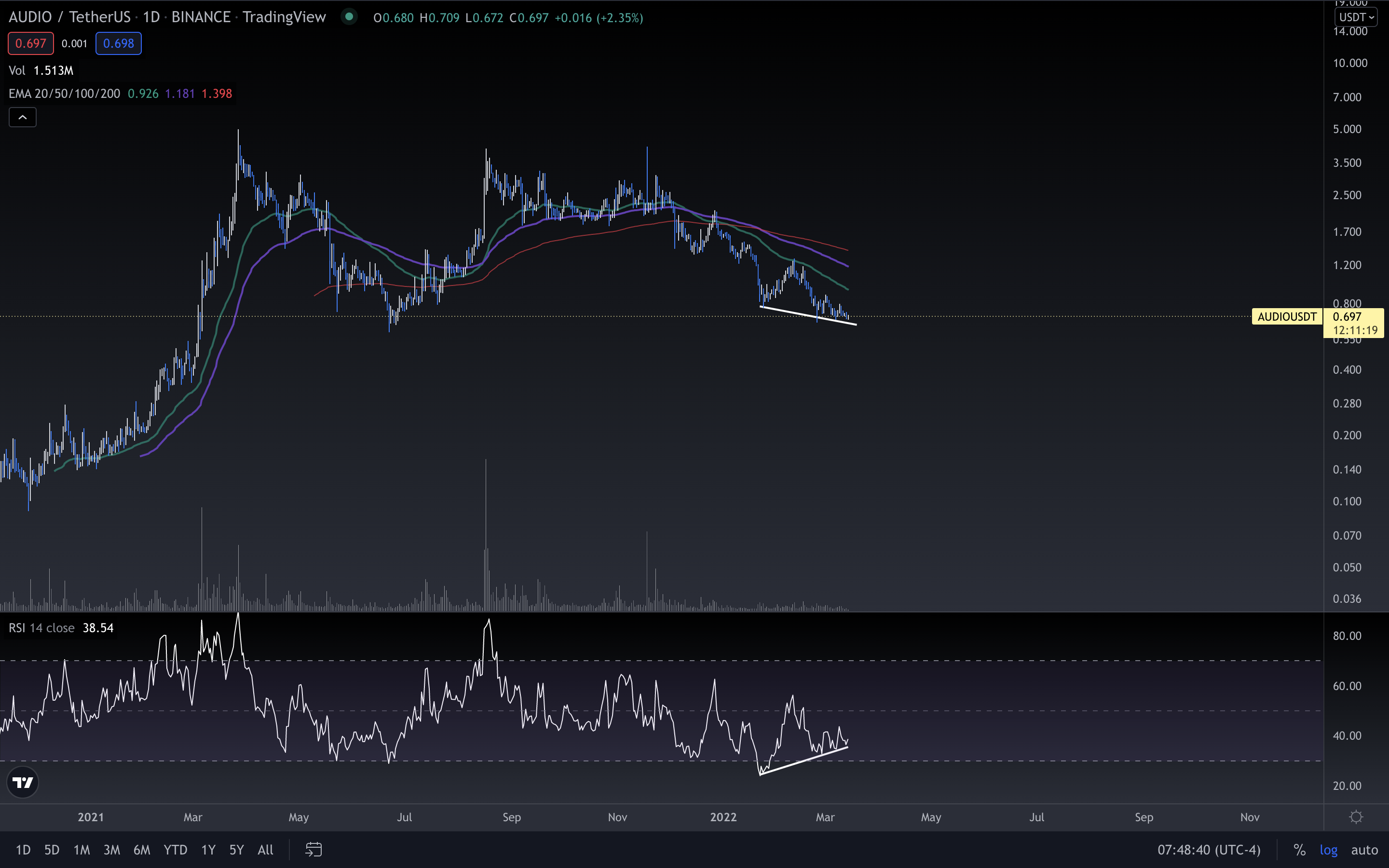 AUDIO had a weak performance in the second half of 2021 as it failed to create new all-time highs after its breakout from the summer lull. Now that the project has returned to its prior lows, however, AUDIO could be setting up for a strong reversal based on the bullish divergence forming. A bullish divergence is formed when the price is setting lower lows while the relative strength index (RSI) is setting higher lows, which indicates that more buyers are stepping in to scoop up lower prices in an attempt to turn the project back towards the upside.

Next up is a prominent lending and borrowing platform on Solana, Solend (SLND). What it does is basically in the name — it lets you lend out your Solan (or other assets) and receive yield for doing so. It’s a protocol that comes with all your standard DeFi capabilities, but with a total value locked (TVL) of over $540 million despite boasting just a tiny $20 million market cap and has backers from some top names in crypto, including Coinbase Ventures, Alameda Research, Balaji Srinivasan, and more. 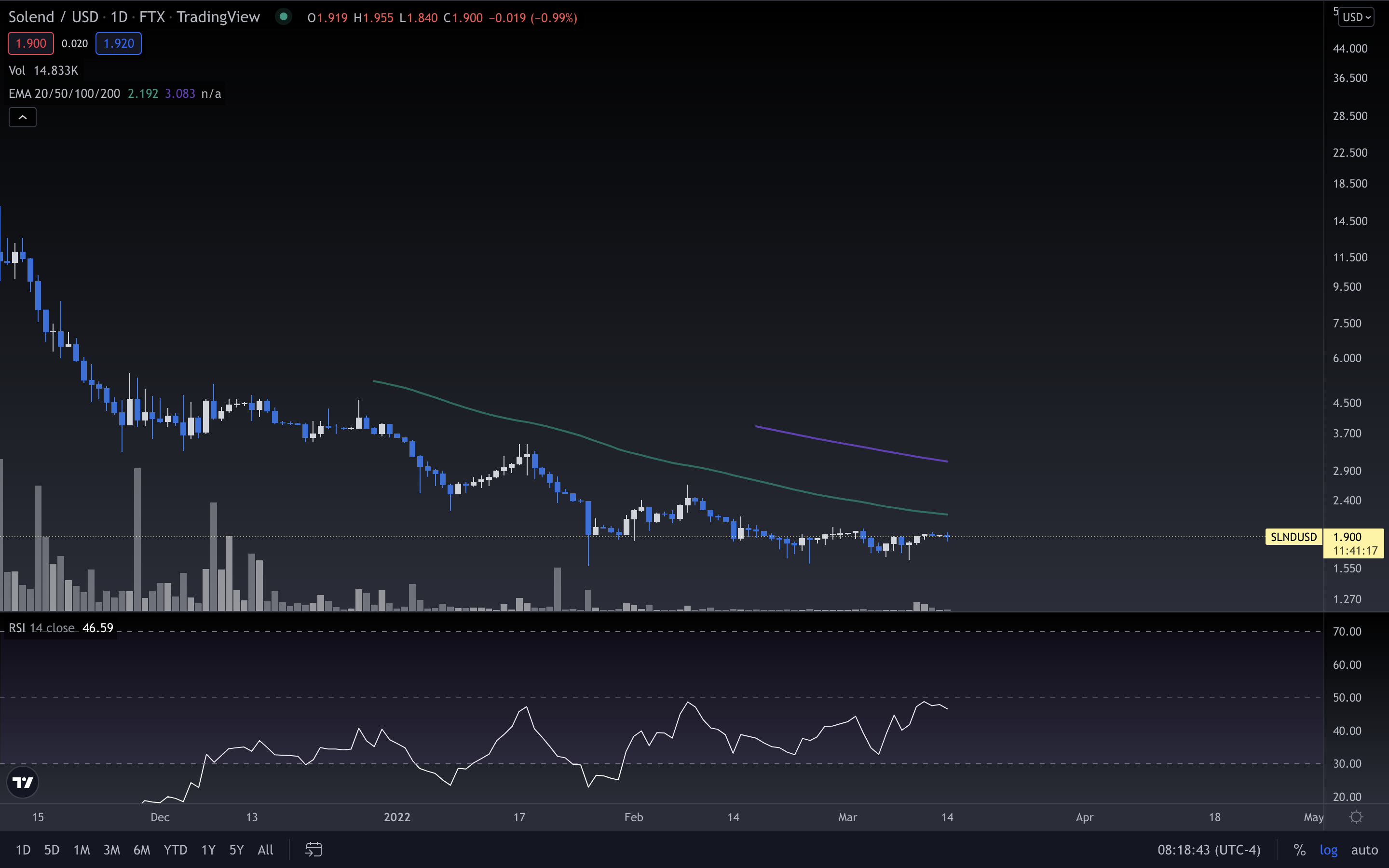 From the token’s launch back in November 2021, SLND has come cascading down from its all time high of $15.80. However, despite bearish price action, the RSI has been steadily rising, setting in higher highs and higher lows, indicative of another bullish divergence. Not to mention, SLND also looks to have some more volume flowing in over the past couple of days, which may be telling us that investors are finding the current price level to be an attrative entry point.

Before instilling all your confidence in SLND, however, have some patience while the overall crypto market recovers. When economic conditions are as uncertain as they are today, low cap projects like SLND tend not to have a good time.

Finally on today’s list of three Solana projects, keep your eyes on the upcoming free-to-play and play-to-earn blockchain game Aurory (AURY). Aurory is a JRPG game where people will evolve in a rich and diverse universe. In Aurory, you will discover Antik and Cryptos, two different areas and biomes, filled with several NPCs and the mystical creatures that are living in this world, called Nefties. The game’s end goal is to own Nefties and use them to fight in battles.

Using play-to-earn mechanics, players can earn AURY tokens and NFTs while playing the game. AURY will allow you to buy items from other players in the marketplace, while also directly benefiting from the growth of Aurory. 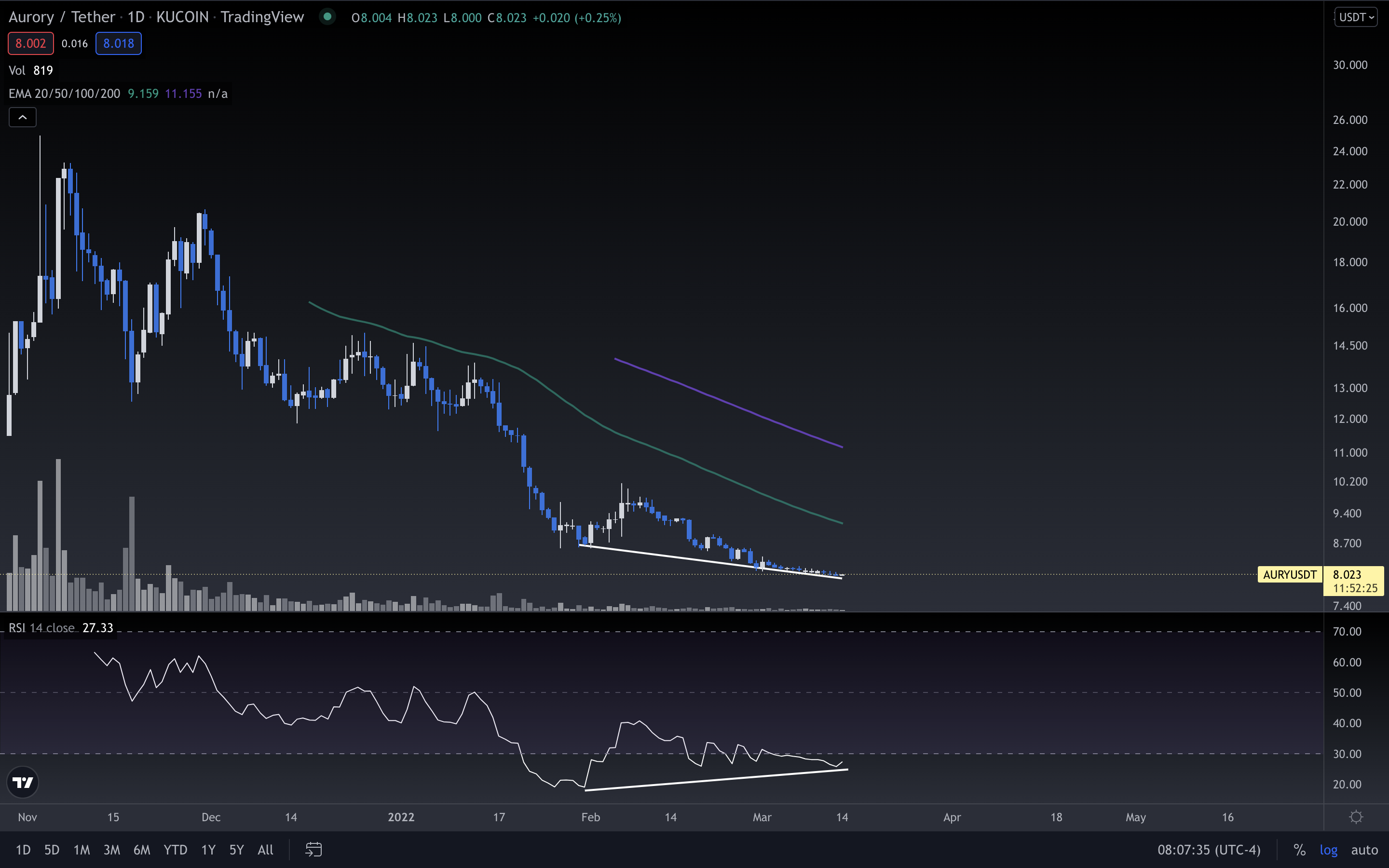 AURY had a weak launch back in November 2021, and the project is currently bleeding out to find its base alongside a large chunk of the Solana ecosystem. However, despite the bearish price action, AURY is also printing a bullish divergence on the chart, which could indicate that higher prices may be on the horizon.

Though not set in stone, I wouldn’t count AURY out by any means. The platform offers a unique in-game experience, with crisp animated graphics and a buzzing fan base. The game’s NFTs are currently trading at a nearly 30 SOL ($2,415) floor, so there’s a lot of capital waiting for the game to launch. Definitely don’t count out AURY when the metaverse bull run comes raging back again.

That’s all for this week’s list of three Solana projects. While they may not turn around to the upside this week alone, it’d be a good idea to add these tokens to your watchlist to find a good entry for when the economic landscape is looking more bullish again.